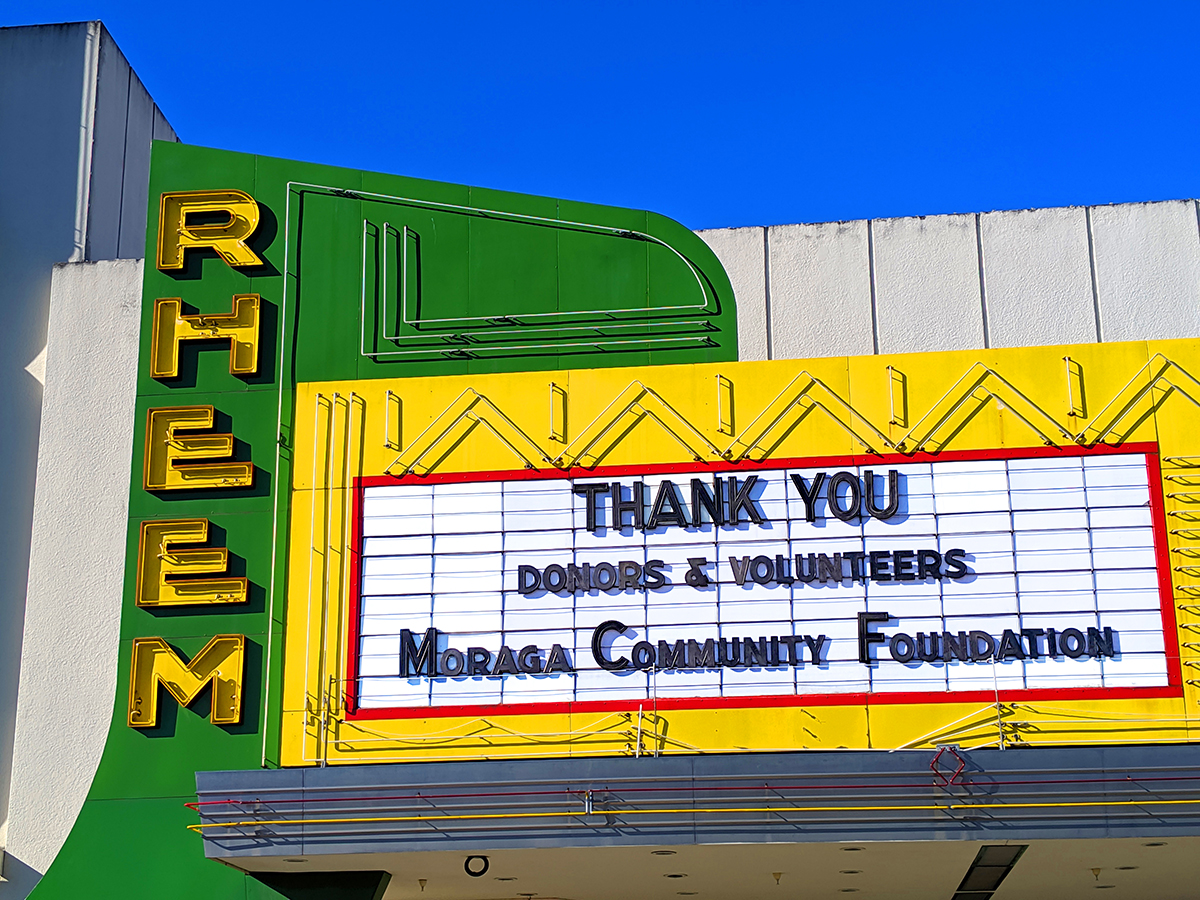 Moraga, California, July 15, 2019 - The Moraga Community Foundation [MCF] will end its lease of the Rheem Theatre on July 31, 2019 and Zemrak-Pirkle productions, the
operator, will cease operations on the same date.

We are very pleased with a successful year that allowed the community to enjoy the benefits of this wonderful Moraga landmark.

In the spring of 2018, faced with a dark theatre and with the intention to eventually purchase the building, the MCF entered into an agreement to lease the property. In
addition to many long hours of volunteer work, community donations and donations-inkind, the MCF spent approximately thirty-five thousand dollars to clean up the building and create a safe environment for Lamorinda movie-goers. At the same time, the MCF entered into an operating agreement with Zemrak-Pirkle productions to re-open the theatre for the benefit of all Lamorinda.

As was expected, the MCF realized a small operating loss over the 14 months of operation. That loss was seen as an investment in the longer term strategy of ultimately
purchasing the theatre in the interest of the community; however, the recent sale of the building to a commercial theater operator has changed that dynamic, and we find it no longer tenable nor beneficial to continue to invest our donor’s money in the short- term operation of the theatre.

We view the past year as a tremendous success in that the Rheem remained open for the enjoyment of the community. It is now in the hands of new owners who we hope will
continue the tradition of providing family friendly entertainment for all to enjoy.

The Moraga Community Foundation is currently focused on our next capital campaign which is to fund the Moraga Commons Restroom Upgrade.

History of the Rheem Theatre:

Architects Cantin & Cantin designed the Rheem Theatre, and it opened in June, 1957. Photos of it were published in the October 19, 1957, issue of Boxoffice Magazine. It was a 1000-seat house with a large stadium section. The auditorium walls featured extensive murals, and the house had what was then the largest installation of rocking chairs in the United States, being the only theater west of the Rockies that was entirely seated with them.

The Rheem was also unusually spacious for its time, with row spacing of 42 to 44 inches, and the seats had extra-wide arm rests. As Gary Parks commented above, despite its late construction date the Rheem had the style of the luxurious Art Moderne theaters of the 1940s; but it also had the spaciousness which has only become standard in recent years, so it was both a throwback and well ahead of its time. The owner of the theater, Donald Rheem, could clearly afford the best of everything, and Cantin & Cantin certainly provided it.